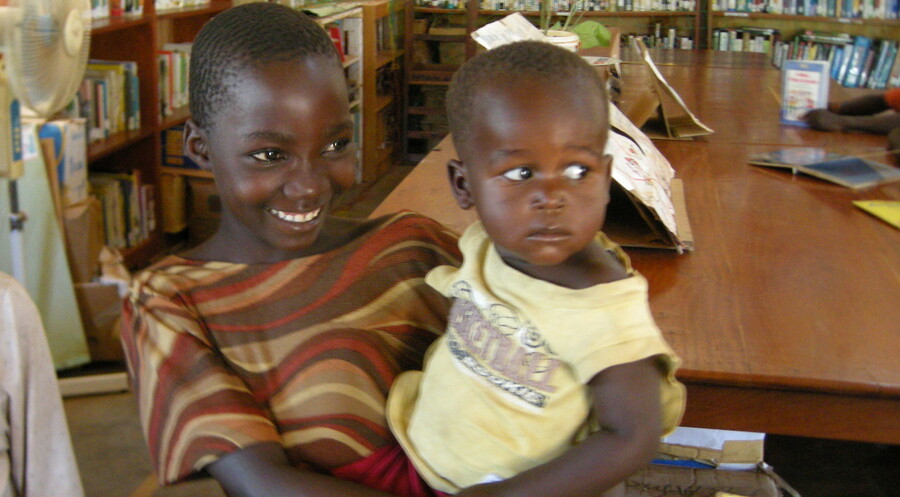 The population of the Kitgum District is estimated at 270,719 with 48 percent being children up to the age of 14. This suggests that the economically active population is small and there is a high dependency level.

(b) Statement of the problem

In a bid to address the above challenges, the Kitgum District Local Government, with the support of and in collaboration with Poverty Relief Africa (PR Africa), a registered non-governmental organization, set up the first children’s library in Uganda at the district headquarters five years ago. Five thousand children users are registered. The library provides services that include but are not limited to: reading materials, instruction in basic arithmetic and English, hygiene and sanitation training, counseling and guidance, follow-up on the children both at home and at school on welfare and education issues; payment of Parent-Teacher Association fees, uniforms, school meals and the provision of scholastic materials for 27 of the poorest of the poor but deserving children, half of whom are war or HIV orphans. These children were chosen from among those who had studied at the library on weekdays for a certain period of time because their guardians could not afford to pay their school expenses. The library is almost the only place that offers children a chance to learn. So, many come from distant villages, walking for more than two hours each way.  If the library were to close, all of the aforementioned services would end, and the underprivileged children would lose the opportunity to experience the joy of learning and to gain hope for the future.

(d) Current situation and challenges faced by the children’s library

• The building currently used as a children’s library was formerly a teachers’ resource centre. Built more than 20 years ago, it is in a dilapidated state with cracks in the walls and floors both on the inside and outside.

• The library has a capacity of only 30 to 40 pupils because of very limited space. Some 50 to 100 pupils whose parents cannot afford to pay their school expenses queue daily on school days hoping to be among the few who will be allowed to use the library’s services. This number rises to 150 to 200 pupils during school holidays and on Sundays and public holidays. Unfortunately, not all of the children end up using library services. When the maximum 100 children have been squeezed into the small building, the rest of the pupils are sent home, despite having queued for more than one hour in some cases. Management was also forced to institute a rotation system whereby pupils can only use the facility for part of the week. Those who use the library for, for example, the first three days of the week are not allowed to come back until the following week in order to give all pupils an opportunity to use the facility.

• Pupils often bring toddlers and infants to the library because they must care for their younger siblings while their parents work their fields or engage in trade to earn a living. However, there is no space to accommodate the younger children in a healthy and safe environment while pupils read or study.

• The building does not have enough space for all off its books. Only 20 percent of the more than 10,000 books in the library’s collection are displayed. The remaining 80 percent are in two small storage areas, one in the Education Building and the other in the library. The former is already full of boxes of books and furniture. The latter is infested with termites, and more than 100 books had to be destroyed. This forced management to pile books up in space that would otherwise be used to accommodate more pupils. Books are piled up high along the walls.

• The power supply is unreliable, and power is frequently cut off. In Kitgum outages often last for several days. As a result, the library is unable to use electric fans or laptop computers not to mention lighting in the reading rooms. Laptop batteries are charged in the government offices, where a generator and solar power are in use. When the batteries run out, registration services and book management must be halted, which is very disappointing to pupils who have waited for a long time. A solar power system would help solve the issue of unreliable power. The region is blessed with a lot of sunshine that can be harnessed to provide a much more reliable power system in the library.

• There is no water supply system in or around the building for hand washing, drinking or for general cleanliness. The nearby public toilets (only one of four stalls can be used) are poorly maintained with no sanitation facilities such as hand-washing basins. It is not uncommon to find children’s feces behind trees within the compound. The children do not have the opportunity to wash their hands after using the latrines because the water collected and provided by the staff runs out rapidly and no one is available to replenish it.